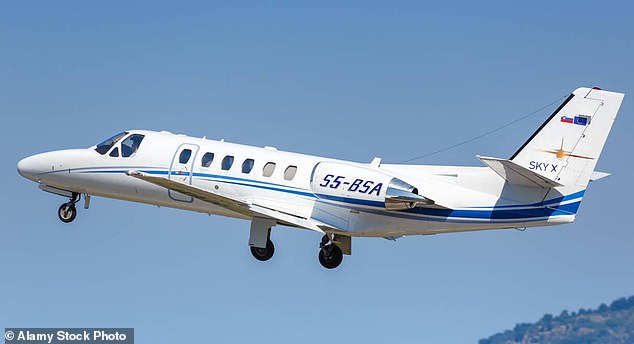 Private Jet Crashes with 4 Onboard in Baltic Sea

A private jet feared to have a family onboard has crashed into the Baltic Sea after ‘rapidly losing altitude’ off the coast of Lative, Spain.

NATO jets worked quickly trying to intercept the plane after viewing an ‘erratic flight course’ with ‘nobody in the cockpit’, a spokesperson for Sweden’s rescue service said.

“We’ve learned that the plane has crashed in the ocean, north-west of the town of Ventspils in Latvia. It has disappeared from the radar”

The Cessna Plane, had four people on board, a pilot, a woman, a man and their daughter reported by German news outlet Bild.

The Bild also reported that the planes’ pilot reported an issue with the cabin pressure soon after take-off and that authorities lost radio contact with the aircraft soon after.

Authorities also stated that the plane ‘ran out of fuel’, resulting in it crashing into the Baltic Sea.

The plane which took off from Jerez in southern Spain, turned twice at Paris and Cologne before heading out over the Baltic Sea. Information on the FlightRadar24 website indicates that the jet had not set a predetermined destination.

NATO fighter jets were dispatched from Estonia and followed the plane, a lithuanian airforce spokesperson said.

When the plan was reached no one was visible to be in the Cessna’s cockpit, the Swedish Rescue service said.

🚨#UPDATE: The plane has crashed, Roughly 15 kilometers off the coast of #Latvia.

Flighter jets from Germany, Denmark and Sweden were called in an attempt to make contact with the aircraft as the plane continuted to fly across nothern Europe ‘but they saw no one’, Lars Antonsson of Sweden’s Maritime and Air Rescue Centre said.

The Swedish Maritime Administration have sent rescue helicopters, boats and planes to the crash site, and the country’s coast guards have confirmed the wreckage has been found, the Mirror reported.

Rescue efforts are underway however officals warned that the chance of finding survivors is low.

Read Article
If you’re like many of us, you’ve always wanted to fly. Fly something, anything almost, from a Cessna…
Read Article
The governments of Brazil and Montenegro are currently collaborating on a solution for the Embraer E195 aircraft, which…