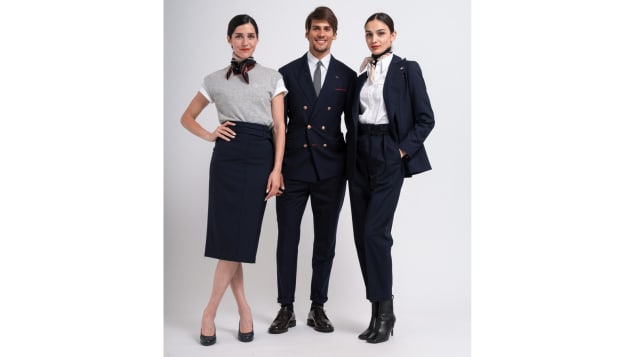 After six months of commencing operations, ITA Airways has begun its renovation process based on the concept of Made in Italy and sustainability. Let’s see what the airline’s new identity looks like.

On June 2, ITA Airways deployed the brand new A350 on its new intercontinental route, Rome Fiumicino – Buenos Aires. Besides marking an important achievement in the development of ITA Airways’ network, this flight also featured three essential changes in the carrier’s brand image:

For the occasion, Brunello Cucinelli stated:

“The idea of this stylistic consultancy with ITA Airways certainly stems from a common vocation (…) to represent an image of Italy that is recognized internationally as the cradle of a culture inspired by beauty, art and traditions”

In developing a new brand image, ITA Airways is led by one of the company’s main aims: playing a role in the development of the whole economic system of the country. Therefore, the new uniforms will be produced in close collaboration with medium-sized Italian enterprises.

The new interiors are inspired by the values of comfort, elegance, and simplicity. Colours play a relevant role, with the predominance of blue and sand. On long-haul flights, passengers will also enjoy a progressive lighting set-up, which seamlessly changes based on the flight stage: boarding – take off – fly – dinner – lunch – sunrise – sunset – night.

Sustainability at the Heart of ITA’s Renovation

ITA Airways has sustainability at the heart of its development. In fact, the A350, along with the new uniforms, culinary offers, and interiors, is the actualisation of the sustainability aims pursued by the new Italian airline. For instance, the new aircraft will enable ITA to reduce per-seat fuel consumption and CO2 emissions by more than 20%.

According to its business plan, ITA’s fleet renovation over the next three years will lead the carrier to be one of the greenest in Europe, with 75% of its fleet made up of new-generation aircraft, whose average age will be amongst the lowest in the aviation industry.

“Destination: You,” ITA Airways’ new advertising campaign, conveys a message of people-centricity, whereby the airline becomes the medium that brings people and their stories together.

The campaign started on June 1, with a TV spot broadcasted during the Italy-Argentina match in London. From June 2, the campaign will be on air on the main tv networks in 60” and 30” formats, in the main national newspapers, and on the main news websites and portals.

What do you think of ITA Airways renovation? Let us know in the comments below!

Both Pilots Asleep During ITA Flight to Rome?

Read Article
TUI UK has cancelled all routes from the United Kingdom (UK) to Croatia,for the remainder of the year.…
Read Article
Russia has made the decision to ban some international flights out of the country to keep the rented…