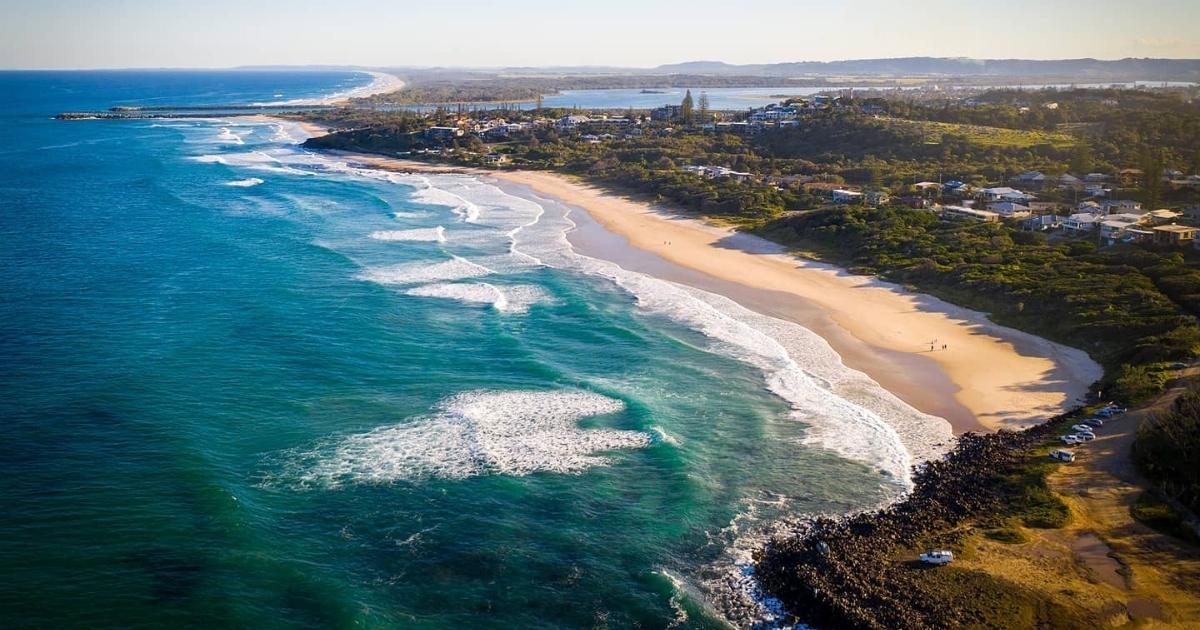 If you’ve travelled to the hippie town of Byron Bay on a plane, you’ve probably heard of Ballina. But for everyone else, Ballina has always been nothing more than a ‘retirement village’ on the coast. However, the town has come to life in recent years with super cheap flights, holidaymakers and Byron spillover.

It’s not hard to see why the town is changing its narrative with access to the most pristine 32-kilometre stretch of aqua-blue coastline, subtropical rainforest, untouched landscapes and iconic Australian wildlife. It not only challenges its MTV-approved neighbours but competes on the biggest stage as a serious tourism destination.

Ballina is one of Australia’s cheapest destinations

With flights departing Sydney as cheap as $42 one way in November, Ballina is one of Australia’s cheapest domestic tickets this summer. Only Melbourne and the Gold Coast exist in the same budget ballpark while seriously lacking the small-town beachy charm that Ballina provides in abundance.

Exclusively available through Jetstar, you can fly one way from Sydney for $42 with a Club Jetstar membership or $49 without. Designated as Flight JQ456, the services will favour early birds, with the flight leaving at 6:15 am and arriving at the coastal town at 7:30 am. Flying seven times a week, the airline uses its spacious single-aisle Airbus A320 for the route.

Costing less than a fancy cinema ticket or a meal for one in Sydney, the fare will only cover the basics, such as a 7kg carry-on bag. If you require 20kg of checked baggage, fee-free flight date changes or in-flight meals, you’ll need to upgrade to the airline’s ‘Plus‘ package, costing $85 for members and $92 for non-members. Despite the price hike, the flight is still comparatively cheaper than most domestic flight routes in Australia this summer. If you plan to travel no-frills, the route will be cheaper than a taxi ride to the airport!

With a shoreline that rivals the perfect breaks and turquoise shimmer of Hawaiian waters, Ballina could be your next favourite surf trip this summer. Thirty-two kilometres of crystal clear south pacific sea hugs the town with waves that closely rival Byron up the road, it’s hard to find a reason not to love Ballina. Thanks to its ‘lesser’ reputation, beaches are quieter year-round but enjoy the same sunkissed conditions as the hippie commune neighbour.

While the sleepy coastal town enjoys some of Australia’s finest coastline, it’s also gaining a following on the culinary map. From farm-to-plate experiences to weekly bustling farmer’s markets, fresh produce is just as big here as it is in Bryon. Head down to Ballina Farmer’s Market at Missingham park on Sunday mornings for the oldest farmer’s market on the NSW far north coast. Here, you’ll find produce and goods produced within a few miles of the market for a truly authentic Northern Rivers experience.

If one market is not enough, the wider area from Byron to Mullumbimby sees several markets every weekend, including arts and crafts to flea markets. Markets are not everyone’s jam but fear not, as the town is a vibrant hub of outdoor activity. From Kayaking and river cruising down the Brunswick River to hiking trails and aboriginal art tours, the region has something for every outdoor lover.

The Northern Rivers region is also blessed with some of Australia’s most untouched and vibrant national parks and subtropical rainforests. Bundjalung National Park is situated south of Ballina and offers untouched beaches, river walks and campgrounds. It’s also a great place to whale-watch, with November being the last month to make the most of the south-pacific whale migration season.

No weekend is complete in Ballina without a picture with the town’s “biggest” attraction. The big prawn sits proudly near bunnings and alongside a wide range of food outlets, with fresh seafood being an obvious choice.

For those that love to get high, and mo we are not looking at you Byron folk, helicopter tours of the town will take you around Lennox Head and the hinterland. If you’re more adventurous, join Classic Aero for a flight over Ballina in a single-engined PAC CT/4 Airtrainer plane.

Now that you’ve worked up a thirst, it’s time to get your electrolytes at Seven Mile Brewing Co, a father-son Ballina-based watering hole. Serving up American Pale Ale, Cali Cream, and West Coast IPA, you can find their David Hasselfroths in most bottle-O’s, bars and restaurants in the region.

For foodies, head to Newrybar’s famous Harvest restaurant. Located halfway between Ballina and Byron, this nationally renowned eatery features an edible garden and a sustainably-prepared menu of locally sourced ingredients. The Harvest is also home to a 120-year-old wood-fired oven.

As beautiful as Ballina and the northern Rivers catchment is, the region has been ravaged by floods and torrential downpours all year. The community has taken a severe hit, with tourism numbers almost worse off than during the Covid-19 pandemic.

The pandemic decimated travel in Australia for nearly two years, forcing small towns that rely on visitors into a desperate money struggle. Sadly the forecast doesn’t look too favourable for the region as the Bureau of Meteorology predicts a third consecutive La Niña event this summer. The coastal region saw some of the worst rains on record in 2022, although it escaped much of the flooding. However, the town’s inland neighbour sadly made the news more than once for life-threatening floods, which reached 14.4 meters at its peak. By comparison, Ballina’s peak floodwater height reached 2.95 meters.

Despite the threat of more flooding this summer, the region is still hopeful of a tourism boom. The message being sent out by town members welcomes tourists far and wide to come and discover the beautiful Northern Rivers. As with any adverse weather event, it’s important to stay up to date with local news and State Emergency Service (SES) advice.

Even in the wet, the region sparkles, so be sure to plan an affordable weekend getaway to Ballina this summer and support the local Northern Rivers community!

Business Class Passenger Shocked At What Air China Has To Offer

Read Article
The European Union has begun easing travel restrictions imposed on its borders due to COVID-19.  Fourteen nations are…
Read Article
Turkish Airlines is another European Airline which is moving up in terms of its profit. It is also…