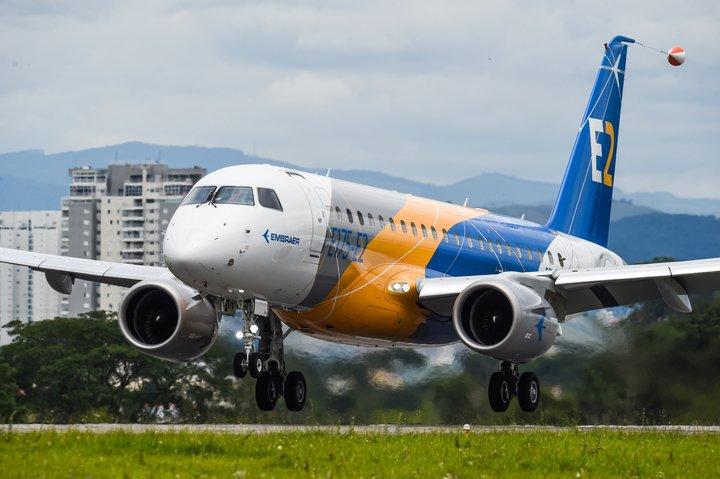 Home Embraer Pledges to Use 100% Renewable Electricity From 2024

Embraer Pledges to Use 100% Renewable Electricity From 2024

Brazilian aerospace manufacturer Embraer has announced that it will be acquiring 100% of its electricity from renewable sources in Brazil.

This is a promising year ahead of its original plan to be powered by 100% renewable energy by 2025.

Sustainability is at the heart of Embraer’s goals. Its eco-friendly E2 Profit Hunter promises to have a “huge role to play” in the aviation industry’s mission to minimise the impact on the environment (according to Embraer’s website) by replacing less efficient aircraft with the smaller E2 Profit Hunter, reducing carbon emissions by 30%.

The Brazilian multinational company has also committed to CO2 neutral operations by 2040, using sustainable aviation fuel (SAF) more often on its aircraft, 100% SAF use by its E2 jets and NG Turboprop before 2030, and the development of low-carbon technologies such as electric, hybrid, hydrogen and SAF propulsion.

Currently, the company is targeting 25% of total fuel use with neat SAF by 2040 and has already started using SAF often in its US operations in 2021.

With its hefty list of intuitive measures to work towards improved sustainability, it’s no surprise that incorporating renewable energy at its São Paulo base is a part of the manufacturer’s environmental, social, and governance (ESG) goals that were set in August 2021.

And while Embraer’s commitment to using 100% renewable electricity is exclusive to its home Brazil, it has chosen 2030 as a target to commit to 100% renewable energy for its operations across the globe.

The manufacturer has also invested in a Renewable Energy Certificate (REC) for 2024, allowing it to stop all Scope 2 carbon emissions (which are indirect emissions of greenhouse gases associated with the purchase of electricity, steam, heat, or cooling) in Brazil by purchasing all of its electricity from solar and wind sources.

2024 will see Embraer achieve a huge milestone for the company and for the aviation industry as a whole.

Embraer’s Vice-President of people, ESG, and communications, Carlos Alberto Griner, explained how this announcement reinforces and reaffirms Embraer’s commitment to environmental, social, and governance practices as it works toward operating under a low-carbon business model. He continued:

“ESG [Environmental, Social and Governance factors] is one the pillars of our strategic plan and we have a broad program with several fronts, and we are looking at every opportunity to accelerate the reduction of our carbon emissions.”

Embraer is clearly determined to make its mark in aviation’s journey towards improved sustainability.

Happy World Environment Day! Let us know what you think about Embraer’s efforts in the comments below.

Read More
Developing an effective vaccine for COVID-19 is only part of the story.  Air cargo is considered the best…
Read More
With airline crews and pilots travelling the world keeping aircraft in the skies during the Coronavirus Pandemic, testing…