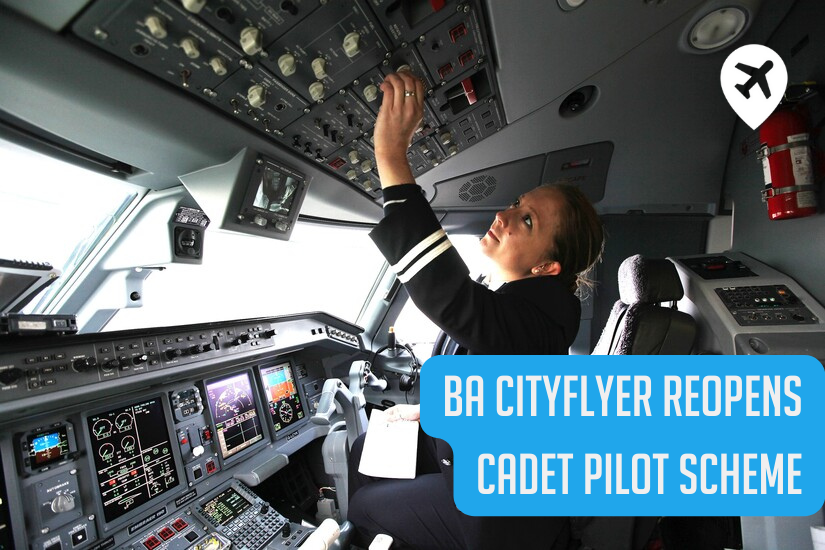 Prior to the COVID-19 pandemic, British Airway’s short-haul offshoot – BA Cityflyer – hired a mix of direct-entry first officers, and cadet pilots through their MPL (Multi-Crew Pilot License) in conjunction with Spanish training provider, FTEJerez. Unfortunately, with the effects of the COVID-19 pandemic rippling through the aviation industry, the carrier was forced to close it’s MPL scheme until further notice.

What will the Cityflyer Scheme Entail?

The British Airways Cityflyer MAPS will be accepting applications from the 3rd to the 14th of October. Assessments will take place in the UK during November and December 2022, with successful candidates commencing training in Jerez, Spain, in February 2023 for the first 54 weeks. During this time they will complete elementary flight training in a piston engine aircraft, as well as complete the ATPL Groundschool program. Following completion of this training, cadets will return to the UK for their Embraer type rating training with British Airways Cityflyer, including BA Cityflyer specific standard operating procedures (SOPs).

Both FTEJerez and British Airways Cityflyer will assess the candidates and those selected will commence an integrated course following the MPL route under the approval of the UK CAA. The MPL (multi-pilot licence) is an alternative to the traditional ATPL training route and its main features is that the multi-crew training is incorporated in earlier stages of the syllabus and that the type rating is also included as part of the course. MPL courses provide candidates more ‘airline flying experience’ making the transition from piston engine aircraft to jet/commercial aircraft easier.

“This partnership will result in well-motivated, highly trained graduates to fly our fleet of Embraer Aircraft. We are delighted to be launching yet another MPL scheme with FTEJerez, as both companies continue to strengthen their longstanding relationship”.

“We are very proud of our partnership with British Airways Cityflyer and we are delighted to be chosen once again as their training provider for the MPL programme. This latest training programme extends our partnership with British Airways Cityflyer, which has resulted in a large number of FTEJerez graduates, including self-sponsored cadets, joining the airline over the past years”.

Want to apply to the Cityflyer Scheme?

Want-to-be cadets, can begin applying between a two-week window starting on the 3rd October 2022. Full details and an application form will be published on the FTE Jerez website: https://www.ftejerez.com/

It is suspected that the eligibility and assessment processes will be similar to the flight school’s Integrated Course:

With an assessment process looking similar to:

Pricing and funding for the course has not yet been announced by FTE Jerez.

Will you be applying for the BA Cityflyer MAPS? Let us know in the comments below!

Airnorth In A Staffing Rut Amid Severe Cancellations

Read Article
Virgin Atlantic cabin crew won’t wear gender-neutral uniforms on flights to Qatar for FIFA World Cup 2022. (Read:…
Read Article
Regulators in the UK and the US have announced plans to collaborate on certifying electric vertical take-off and…