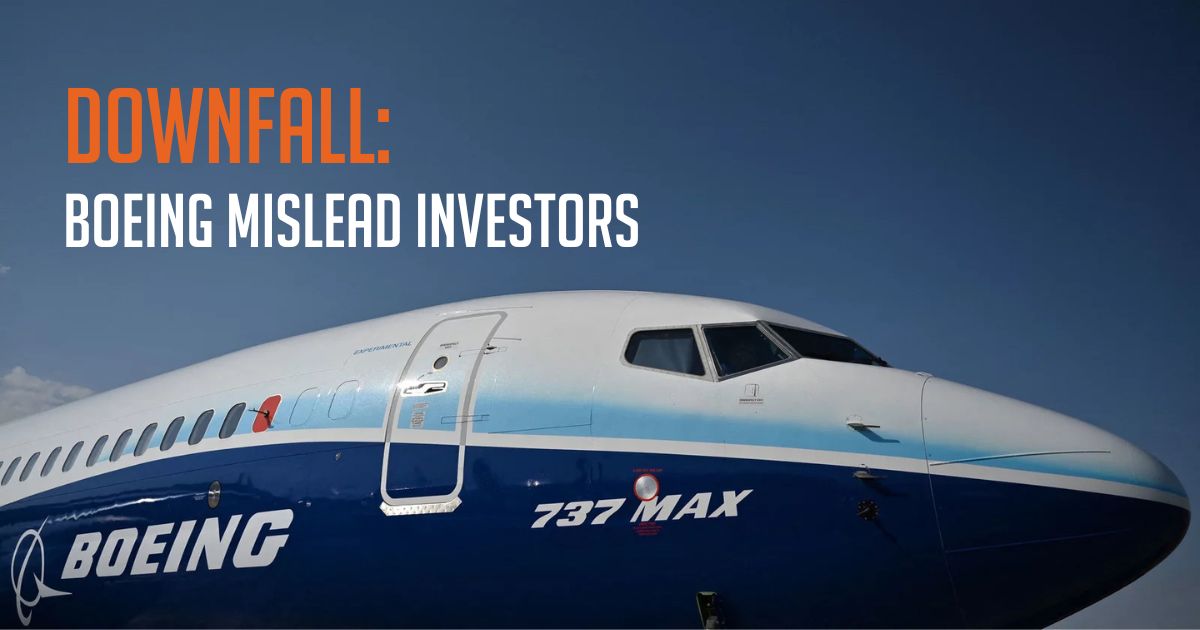 Ten seconds. That’s how long Yared Getachew, pilot of the tragic Ethiopian Airlines flight 302, had to switch off a malfunctioning system which led to the death of 157 passengers. Boeing never admitted that the system in question was flawed and failed to provide adequate training and information to pilots. The 737 MAX was a time bomb, and Boeing knew it was only time before a second crash would occur. Corporate greed was placed before safety, and Boeing lost the trust it had built over the course of a century.

Seven months after the release of the hit Netflix documentary’ Downfall: The case against Boeing’, the American aviation giant will be made to pay a settlement of 200 million dollars, adding to a growing list of charges the manufacturer faces. This is the story of how Boeing sentenced 346 people to death.

An investigation led by the Securities and Exchange Commission (SEC) found that Boeing and its former chief executive Dennis Muilenburg failed to come clean about known safety concerns on the 737 MAX aircraft. The lack of transparency and total deception led to two fatal crashes and 346 lives lost.

Boeing will now pay 200 million to settle the stock market regulator’s charges against them. Mr Muilenburg has also been charged one million dollars after agreeing to settle the same charges. This is just a small fraction of the larger picture for the aviation giant, with estimated costs of the two incidents totalling over twenty-billion dollars. Several smaller charges and claims are expected to continue into 2023, five years on from the first crash.

“In times of crisis and tragedy, it is especially important that public companies and executives provide full, fair, and truthful disclosures to the markets. The Boeing Company and its former CEO, Dennis Muilenburg, failed in this most basic obligation. They misled investors by providing assurances about the safety of the 737 MAX, despite knowing about serious safety concerns,” said SEC Chair Gary Gensler.

The SEC found that Boeing “put profits over people” in an effort to rehabilitate its image following the fatal crashes. A fall in demand, combined with steep competition from Airbus, led to corners being cut and safety issues ignored. The announcement of the Airbus A320 Neo triggered money-hungry Boeing executives to find faster and cheaper ways to produce a fuel-efficient aircraft. The A320 Neo is a new-era fuel-efficient single-aisle aircraft enabling airlines to fly further and cheaper, increasing profit margins in a world where fuel prices and demand are rapidly rising.

A merger between Boeing and McDonnell Douglas worth 13 billion dollars in 1997 brought about significant change to the once unmatched manufacturer. Boeing is synonymous with quality and safety, with all airlines purchasing Boeing aircraft. The merger led to a change in attitude. Top-level executives started to compromise the company’s unwavering commitment to safety and began putting more importance on stock value and the bottom line.

The American giant’s storied history was fast coming under threat, with thousands of jobs being cut despite an increase in output. Known worldwide for the 747 aircraft, it featured in films such as ‘Snakes on a Plane’ and became the world’s largest piece of art when Qantas launched its 1994 “Wanula Dreaming” livery. Andy Pasztor, a former journalist at the Wall Street Journal, said during the opening credits of the Netflix hit documentary, “If it ain’t Boeing, it ain’t going,” a phrase used in the aviation industry signifying the impact of Boeing’s dominance. Then tragedy struck.

Reports came in of a passenger plane carrying 189 people crashing off the coast of Jakarta, Indonesia, just 13 minutes after departure. Lion Air Flight 610 was fighting hard to stay in the air for several minutes while an unknown system was forcing the nose of the plane downwards at incredible force. Despite the captain and first officer’s best attempts to troubleshoot the issue, the 737 MAX dove into the sea at 450 miles per hour, killing all 189 people onboard. The pilots had no idea what they were battling.

Pilots fought with an onboard system designed to lower the nose of the aircraft to compensate for poor design. Designed by Boeing, and known as the Manoeuvring Characteristics Augmentation System (MCAS), the software would correct an aircraft’s trajectory automatically based on the information that the external sensors pick up. The MAX only had one angle of attack sensor. In the world of aeronautical engineering, using a single point of failure on a safety-critical system can lead to devastating outcomes.

Despite the system being inherently flawed, the Lion Air pilot Bhavye Suneja had no idea that the system was onboard the plane he was flying. He did not know it required switching off. Boeing disguised MCAS as an existing system onboard the 737 MAX to prevent the need for additional pilot training, something that, if required, would harm sales.

Boeing and Muilenburg were quick to release a statement following the crash, selectively highlighting specific facts from an official report led by the Indonesian government, implying that pilot error and poor aircraft maintenance contributed to the crash. Boeing and Muilenburg knew at the time that MCAS posed an ongoing “aeroplane safety issue” following an internal safety review performed long before the first crash. The aviation giant had already begun redesigning the flawed system to address the known issue, leaving potentially dangerous aircraft to continue flying millions of passengers daily.

In the Netflix documentary’ Downfall: The case against Boeing,” Andy Pasztor said that the most disturbing and most revealing part of the whole story is that “Boeing did the absolute least that they could do” and “they were betting that the problem would not reoccur before a permanent fix could be implemented,” following the Lion Air tragedy. Then lightning struck twice.

People around the world woke up to the news that a second Boeing 737 MAX had crashed in Ethiopia, carrying 157 people, all of whom were presumed dead at the time. This sent shockwaves around the world and through the aviation industry. Two crashes of the exact same nature in the space of five months is unheard of, and the focus turned on Boeing.

There was one key difference between the two incidents. On this occasion, the pilots knew MCAS was onboard, yet they still crashed. An internal risk assessment revealed that pilots would only have 10 seconds to react before “catastrophic” outcomes were inevitable. This coincides with the fact Boeing were adamant that no simulator training would ever be required. They talked about “Jedi-mind tricking” regulators into thinking that MCAS required no special treatment and that it required no additional training.

The Ethiopian Airlines flight crashed around 40 miles away from Addis Ababa, hurtling towards the ground at 700 miles an hour, impacting the ground like a missile. There weren’t enough parts of a plane left to resemble anything close to a plane. This set off a chain of events which rippled through Boeing’s executive room. On the same day of Flight 302’s tragic crash, Ethiopian Airlines grounded all 737 MAX aircraft in their fleet. Just a day later, the Civil Aviation Administration of China ordered airlines to stop flying the plane.

Without much delay, airlines and governments around the world followed suit and proceeded to ground 737 MAX aircraft over safety concerns. The Federal Aviation Administration of the United States (FAA) remained solitary in the belief that the plane was airworthy. In a matter of days, the black box was unearthed and analysed in France, while the jackscrew surfaced in Ethiopia in a full nose downwards position, leading to irrefutable evidence that MCAS caused the crash. Moments later, then president Donald Trump triggered an emergency order of prohibition, grounding all MAX 8 and MAX 9 aircraft. In December, Boeing’s board fired chief executive officer Dennis Muilenburg for mishandling the situation.

MCAS is a flight control law used to improve the 737 MAX handling characteristics and decrease pitch-up tendency at elevated angles of attack. In layman’s terms, if the plane is pointing upwards, MCAS will force the nose down by adjusting the horizontal stabiliser in a downward position.

It sounds like a straightforward system, but there’s a deadly issue with the way Boeing applied it to the aircraft. The manufacturer used just one sensor meaning the system had a single point of failure. With unpredictable conditions and aerial hazards such as balloons and birds, there are a lot of factors that can damage a single sensor responsible for the lives of everyone onboard. Boeing utilised the MCAS system to compensate for poorly thought-out design in an effort to produce a new, fuel-efficient aircraft to compete with Airbus’s market-leading A320 Neo.

With little to no time to design an entirely new aircraft, Boeing set out to improve the existing 737NG aircraft by fitting newer, larger and more fuel-efficient engines to the MAX. The LEAP-1B engine is significantly larger than the CFM56-7 engines used on the 737NG, meaning they had to be mounted slightly higher and further forward. This changed the aircraft’s aerodynamics resulting in lift at high angles of attack.

MCAS was introduced to stabilise the aircraft during elevated angles of attack when the flaps are up. However, there was a misconception that MCAS was an anti-stall system, and while it indirectly helps aircraft avoid stalling, it wasn’t designed for that purpose. Boeing did try several alternative options before resorting to MCAS, but all efforts were insufficient to pass regulation.

In an effort to maximise sales and profit, Boeing purposely omitted MCAS from the pilot manual. Additional flight simulator training would have supposedly been detrimental to the MAX. As a result, pilots were flying blind with a deadly weapon onboard and had no knowledge of how to disarm and control the issue. The FAA began requiring MAX pilots to undergo MCAS training in flight simulators by 2021.

Nearly four years on from the first crash, airlines are putting orders in for MAX aircraft, while Ethiopian Airlines resumed using the model in February. As of the 9th of May, there were 581 in operation, with Southwest Airlines maintaining the largest fleet of the 737 MAX at 72 aircraft. Despite the numbers and FAA reapproval in 2021, airlines and passengers remain hesitant and cautious.

Boeing and Muilenburg consented to cease-and-desist orders without admitting or denying the SEC’s findings. The orders included a penalty of 200 million dollars for “negligently violating the antifraud provisions of federal securities laws”.

Air Serbia Plans Expansion In The US With New Routes