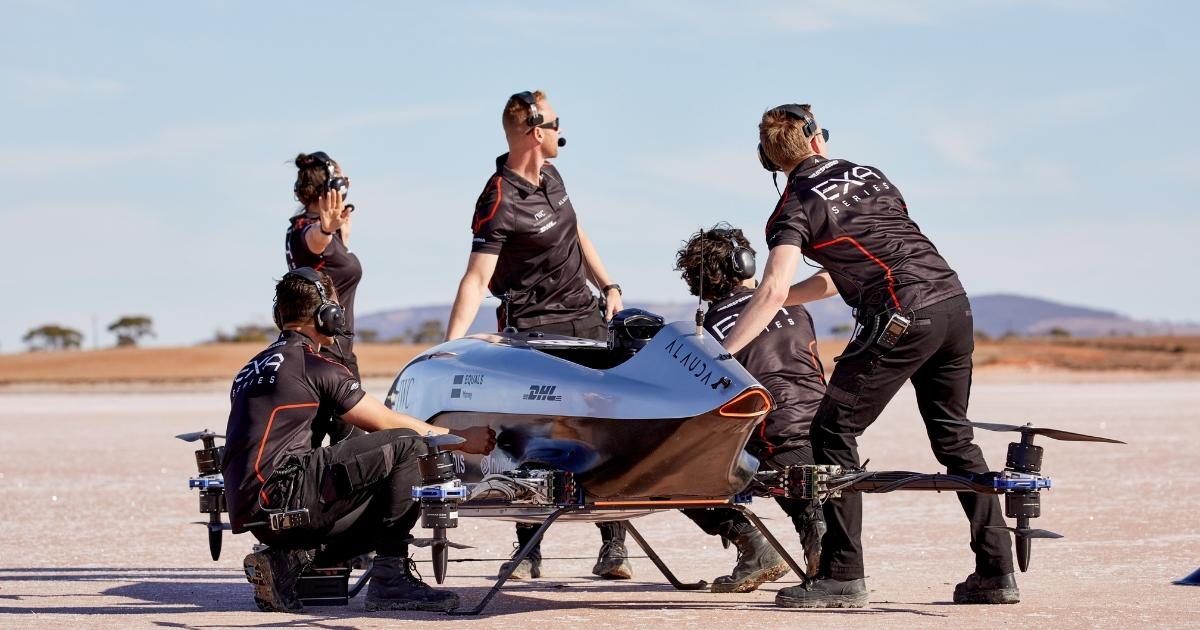 A lot of very futuristic and exotic things happen in Australia’s ‘barren’ outback. From Pine Gap to the opal mining town built underground, if there’s something unusual happening down under, South Australia is a pretty good place to start. The festival state went back to the future when Airspeeder, an electric VTOL flying car racing series, hit Lake Lochiel in South Australia’s salt flats.

Robert Zemeckis’ 1989 box office movie was only seven years astray when predicting flying cars in humanity’s future. Back To The Future 2 predicted flying cars on October 21st, 2015, also known as back to the future day. Seven years on from the date, a revolutionary series saw the first flying car race take place in Australia’s red outback. The series was a landmark moment in motorsports and the future of air travel.

Airspeeder might not be a household name yet. But that could change very soon as the founder Matt Pearson likens the event to formula one racing in the sense that every transportation advancement in history has stemmed from motorsports.

“Every transformative moment in human transportation has been accelerated by motorsport. As we stand on the cusp of the 21st century’s great leap forward in delivering on the promise of flying cars, the role competition plays is as important as ever,” said Pearson.

The event is the first of its kind in the world. Taking place in the remote nothingness of South Australia’s salt lakes, the world’s most elite names in aerial and motorsports took to a digital racetrack in the sky, competing for the prize of the ‘first flying car race winner’.

The historic race garnered interest from motorsports legends worldwide, including Bruno Senna, nephew of the late Ayrton Senna, three-time Formula One world champion. Senna joined Airspeeder as a development pilot and ambassador and commented on the race alongside Nikki Shields, acclaimed motorsports broadcaster.

The aerial sporting event hopes to reinvent the wheel and provide a platform for the everyday use of flying cars in the future. For now, the cars are piloted remotely, while Matt hopes that pilots will be able to take over within the next 18 months. “Actual racing with crewed racing, it looks like 2024, really, is when that’ll start to look possible … but we’re really focused on the safety elements before we go putting someone in it.”

Alauda, also founded by Matt Pearson, is the genius behind designing and producing the electric VTOL aircraft. For those not quite up to speed with what that is, VTOL stands for Vertical take-off and landing aircraft. Think spaceships and flying saucers that you see in the movies. While the cars produced currently are remotely piloted, the aim will be to fill them with people soon. For now, the ‘drone’ cars are paving the way forward for flying cars, creating an engineering digital ecosystem to possibly scale production in the future.

The technology and talent involved in pulling off an engineering feat of such magnitude took a truly global effort. The very best from formula one, motorsports, and aerospace engineering were involved, including multi-world championship-winning engineers from Ferrari. The team also featured development talent from the likes of Boeing, Airbus, McLaren, Jaguar Land Rover and Rolls-Royce.

Cutting-edge technology and a team of world-leading experts

The technology used in developing these drone cars will pave the future for everyday passenger flying cars. The shell is a 4.1-meter flying racing car (eVTOL), carbon fibre construction full-scale racing quadcopter. The specs of the flying cars are what really impress. The quadcopter produces an output of around 320kW power, equalling an Audi SQ7 performance SUV car. However, while an Audi SQ7 weighs around 2.5 tonnes (2500kg), the eVTOL car weighs 130kg without a pilot.

This results in a seriously fast, high-powered, performance vehicle capable of reaching nought to 62 miles per hour in 2.8 seconds. On the ground, this would put the flying car in hypercar territory. The difference between a hypercar and an eVTOL car is that the latter is designed to fly up to 500 meters off the ground!

While it may feel like we’re a lifetime away from going down to the local Honda dealership to pick up a ‘runaround’ flying car for the family, Alauda is already partnering with household names in sustainable tech. Telstra Purple, Acronis and Amazon Web Services were all involved in the development of the aerial racecars by providing the digital architecture required to pilot vehicles in urban environments.

Meanwhile, the South Australian Government has played a pivotal role in getting the race on the ‘sky road’ by providing Alauda funding to develop a hyper-factory in Adelaide. The production factory also plays host to developing spacecraft, satellites and aircraft.

The sport promises to be more diverse than traditional road racing

Lexie Janson, an EXA series pilot, has been competing in drone racing since 2015 and has become a world leader in first-person view (FPV) racing.

“I won the Polish championship, a couple of German [championships], as a female pilot, I also took place in China, Korea and all around the world,” she said.

Lexie isn’t the only racing royalty involved. Bruno Senna, the nephew of formula one legend Aryton Senna, is a keen drone pilot and plans to grace the ‘sky grid’ one day.

“I hope the racing background will help me in many things when it comes to competition but also helping Airspeeder as an organisation to try [to] build a racing series that’s competitive, that’s fun. They have a really good format for everyone to enjoy. We’re building this from the ground up, and it’s so important to make sure we come up with something that’s really interesting.”

A second race will take place this weekend with lofty plans to take the race around the world. Locations such as the United States and the Middle East are on the agenda.

Zephatiali Walsh beat fellow competitor Fabio Tischler in the very first EXA remotely piloted race on the pink salt flats of Lake Lochiel near Adelaide, South Australia. The race proved to be an enthralling, tight competition. It was the first time two pilots were fully licensed eVTOL cars in a competitive setting.

Over 270 test flights and thousands of hours of simulator preparation were necessary to prepare pilots for the event. The race took place over a one-kilometre digital sky track broken into two sessions, including rapid battery-swap pitstops. The EXA series will serve as the development and feeder series for the Airspeeder fully crewed Grand Prixs starting in 2024.

The series will be covered digitally by highlights on YouTube. But plans exist for the series to be covered live and on-demand for viewers all around the world. The highlights package from race one can be found here.

Zephatali made a move, flying just one meter below his fellow competitor Fabio Tischler towards the backend of the race, which led to the experienced pilot being crowned the first eVTOL race winner.

“As pilots, we’ve been developing this sport behind the scenes over hundreds of hours of simulator, engineering and testing work, and through this process, we have been united as a group of pilots in one common goal – to deliver this historic first race,” said Zephatiali.

“As soon as the lights turned green, we became racers competing for a place in the history of this sport and flying cars as the coming transportation revolution. I couldn’t be prouder to know that forever more, I’ll be the first winner of an electric flying car race, and I look forward to retaining my crown as we go racing around the world in the coming months.”

With so much scope to grow the sport and build a large worldwide fanbase, Grand Prixs with wider grids flown over a multitude of locations and track layouts are due to kickstart in 2024. The beauty of a sport floating above the ground is that there are very few limitations as to where a race can be held. Races could theoretically be held anywhere from marine to forest, desert and urban landscapes.

Read Article
Smartwings, the largest Czech airline, is expanding its international routes with a new base in the Canary Islands.…
Read Article
When Nik approached me, I thought he was going to ask me to leave.  I was strolling along…