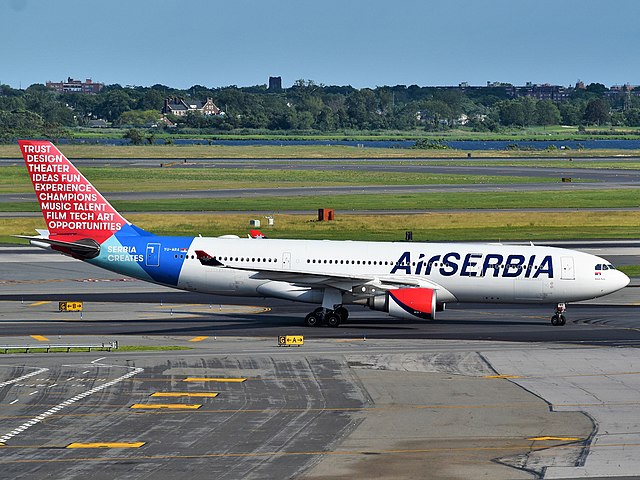 Air Serbia has announced it will officially be flying its first route to China and another to the United States by the summer of next year. The new flight to Tianjin will commence on the 9th of December, while the route to Chicago is set to start in May 2023.

Air Serbia is the flag carrier of Serbia and also one of the most popular airlines in the Balkan regions. The company serves routes worldwide, including popular destinations such as New York and Dubai. Recently, the Serbian aviation company announced plans for an expansion for popular destinations worldwide, mainly targeting the United States. For now, Air Serbia has announced a new route to the American city of Chicago and the enormous Chinese metropolis of Tianjin.

The route to Tianjin Binhai International Airport from Belgrade Nikola Tesla Airport will be the airline’s first flight to China. Air Serbia will also become the first European flag carrier to have a direct flight to China.

The inaugural flight will take off from Serbia on the 9th of December and will be scheduled to run weekly. The flights will be served aboard the airline’s two Airbus A330-200 aircraft. It will take an average duration of 9 hours and 50 minutes, and the prices start from €649 each way.

The flight linking Europe to China has seen huge demand and has sold out for the first five weeks of operation. As China is becoming more popular as a holiday destination, it is no surprise that most flights are booked.

Tianjin is the seventh largest city in China and, with its surrounding areas, registers a massive population of almost 14 million people, two times larger than the whole country of Serbia.

Another new route that has been announced by Air Serbia to start flying in May 2023 will be the one from Belgrade Nikola Tesla Airport to Chicago O’Hare Airport in the US.

Air Serbia currently operates a route to New York JFK, yet demand from travellers has required the company to establish a new route between the two countries. Although the flights start next year, the airline is already selling tickets for the new destination. The flight will take an average of 11 hours and will also be operated with the A330 Airbus planes.

“This is an extremely important city and we are certain that direct flights between Belgrade and Chicago will mean a lot not just to the Serbian diaspora, but also to the wider Balkans region,” says George Petković, Vice President Americas, Air Serbia.

The route from Belgrade to Chicago will see two flights per week in the beginning, regularly scheduled for Wednesdays and Sundays. From the 12th of June 2023, the company will introduce a third flight scheduled for take-off on Mondays.

Chicago is the third largest city in the United States and the most important city in the Midwestern region of the US, making it a significant business, cultural, and touristic hub for visitors. Chicago is also home to a large minority of Serbians living in the United States, as it has the most significant population of ethnic Serbs. The city is home to two neighbourhoods notable for their Serbian communities: Irving Park and Norwood Park.

“By introducing flights between those two cities, the region will be better connected to Chicago, and passengers will have more choices. With the good connections that Air Serbia offers we expect great interest for these direct flights, for those who want to continue their travel to other destinations.”

Will you be flying any of these routes? Let us know in the comments down below!

Read Article
Just yesterday, Canada’s largest airline celebrated a large milestone with an even larger donation. In celebration of Air…
Read Article
Norse Atlantic has announced more additions to its growing schedule. The carrier will take off from London Gatwick…