Aviation Vs the Illegal Wildlife Trade

The IWT certification was introduced last year and incorporates 11 commitments of the United for Wildlife (UFW) Buckingham Palace Declaration for airlines engaged in flighting the illegal wildlife trade. These commitments include adopting a zero-tolerance policy regarding illegal wildlife trade, improving the industry’s ability to share information about illegal activities, and encouraging as many members of the transport sector as possible to sign on.

The illegal wildlife trade is estimated to be worth between $7 and $23 billion a year, affecting more than 7,000 species. International criminal gangs are exploiting the aviation system to traffic protected plants and animals, to sell them on through the black market. To combat this issue, IATA is working with airlines to raise awareness and provide valuable information and intelligence to national enforcement authorities.

United For Wildlife Emirates A380 © ArabianBusiness.com

As a result, the issue is firmly on the table in the aviation world. Airlines and airports have responded commendably with their commitments to protecting wildlife. Emirates has dedicated the liveries of A380s to wildlife awareness and many airlines have had training workshops to better equip them to deal with illegal activity. 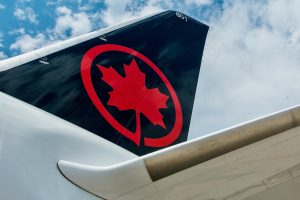 Animal safety and welfare are at the heart of Air Canada’s environmental concerns. In 2018, Air Canada Cargo (ACC) became the first airline to achieve the IATA CEIV Live Animals certification, the highest standard in the transport of live animals. Air Canada has a policy of not carrying any shipments of lion, leopard, elephant, rhinoceros, and water buffalo trophies worldwide as freight, or non-human primates intended for laboratory research and/or experimental purposes.

As a global carrier, Air Canada is playing a meaningful role in helping to prevent the illegal wildlife trade. Its measures are designed to make it harder for poachers to ship illegal products to markets where they can be sold for profit. Air Canada’s IWT certification demonstrates concrete action taken by the airline to combat wildlife trafficking.

“We are proud to be the first airline in North America to achieve this industry standard by taking concrete steps in the fight against illegal wildlife trafficking, as part of a global effort to help conserve wildlife and biodiversity. Air Canada remains committed to operating its business in a sustainable, responsible and ethical way, and is dedicated to the prevention of wildlife trafficking and raising awareness on the issue and its consequences. We look forward to working with key stakeholders and conservation organizations to further combat illegal wildlife trafficking.”

Pangolins are believed to be the world’s most trafficked mammal. Accounting for 20% of all illegal wildlife trade © Louis Mornaud via Unsplash

Animal Welfare in a Pandemic

The pandemic has highlighted the issues of wildlife conservation and biodiversity preservation, which are impacted by the illegal wildlife trade.

The illegal trafficking of wildlife by-passes health checks and borders and presents a threat of disease transmission to both humans and animals. As a result of constantly changing restrictions and import regulations, Air Canada has strengthened its defenses against the illegal wildlife trade by updating its procedures. Agents are empowered to reject and report suspicious shipments and suppliers are encouraged to adopt the IWT into their practices.

“There’s a connection between how wildlife is treated, how it can spread zoonotic disease, and how we’ve ended up with the potential for pandemics in the world.”

As a result of a reduction in passenger flights due to the pandemic, Air Canada pivoted to cargo-only flights. The extra capacity enabled the airline to reunite families and pets separated by travel restrictions. So far 1,500 dogs and cats have been reunited with their owners, bringing some much-needed happiness to people during these difficult times.

What are your thoughts on Air Canada’s animal welfare initiatives? Let us know in the comments below